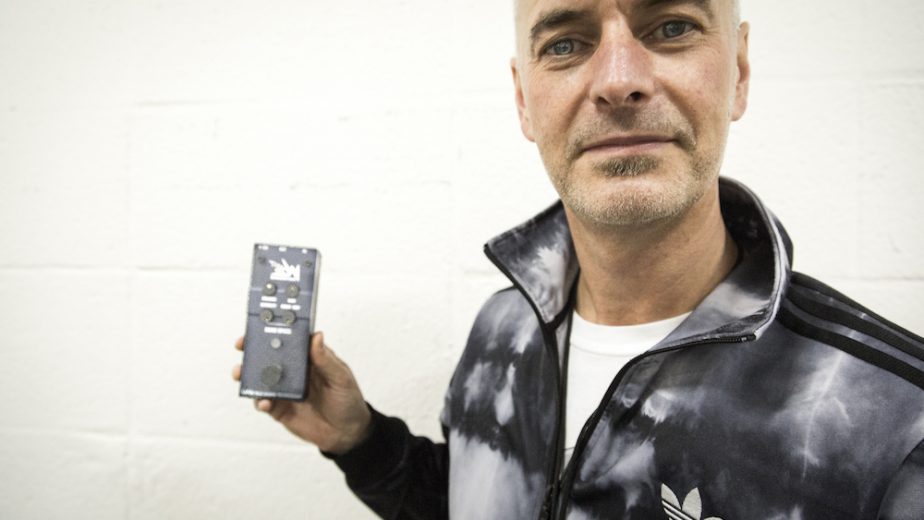 ”Virtual Insanity”, ”Cosmic Girl”, ”Deeper Underground” – just a few of the hit singles Jamiroquai released in the last 25 years since their beginning in the late 80s.
You don’t need to be a die-hard fan to hum along to their songs: a great mixture of Pop, Funk and danceable Disco-music.
The bass player Paul Turner has been a member since 2005 but is also known for his work for and with Annie Lennox, Tina Turner, George Michael and Tom Jones.
Paul is a consistent and enthusiastic user of the RMI BASSWITCH products and just recently added the SONIC SPARK to his board. Jamiroquai released a new record in 2017, they’re on tour and so we got invited to visit them and have a chat.  Unfortunately, life and health sometimes don’t follow the plans of a big touring production so this concert report might not be what you expect.
See for yourself…

A friend of mine and I arrived in Munich around 6 pm and I texted Paul. After the usual hurdles with fussy security guards, blue wristbands, red passes and white tickets we finally managed to meet Paul backstage.
Paul is a great conversationalist: he made time for us, talking about past shows and how he is using the BASSWITCH products: among others, there’s currently the BASSWITCH IQ DI, the BASSWITCH CLASSIC BOOST and the DUAL BAND COMPRESSOR on his board. 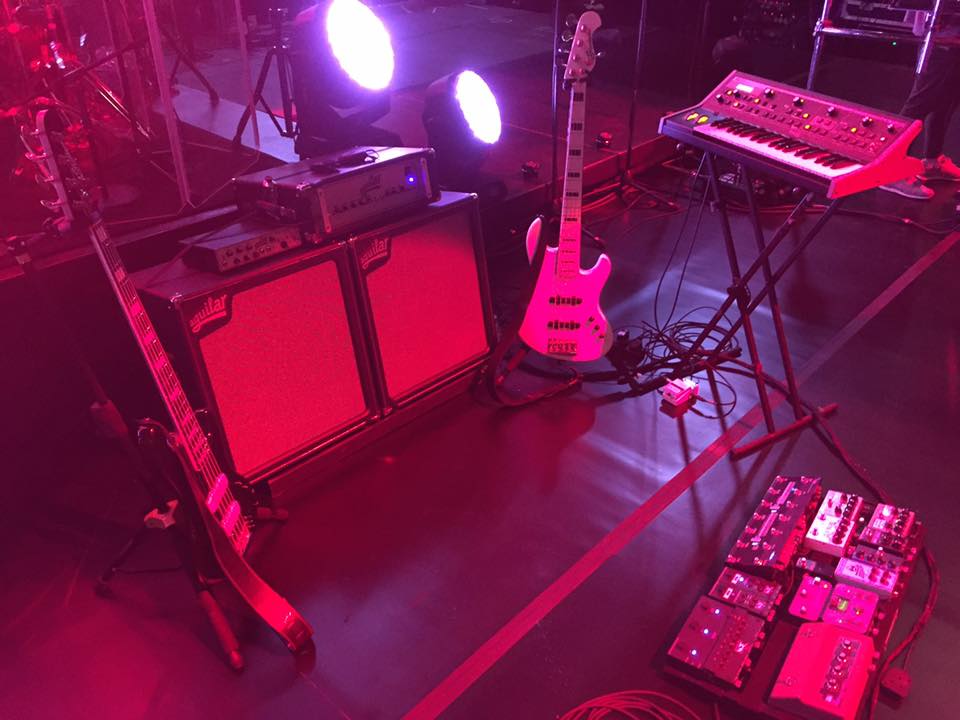 He discussed swapping one of the BASSWITCH babies with his new SONIC SPARK and revealed some surprising information about the on-stage procedure: Usually in a production of this size you’d expect a very precise and accurate execution of the show: sequencers with time codes, programmed light scenes, recallable console mixes, so everyone involved in the show can relax and follow the same procedure every evening. But not with Jamiroquai. Paul explained that only the first three songs are fixed. The rest of the show is spontaneously decided by the singer and founder of the group, Jay Kay.

Paul told us that JK sometimes likes to play a song differently or a add few more times around a specific part or even change the endings. So the evenings are always a challenge for all the musicians and the engineers. Sometimes JK likes to perform a song they haven’t played for a few years, but Jamiroquai wouldn’t be a Grammy award-winning band if they couldn’t take this in their stride. So Paul wasn’t able to tell me if they would be playing ”Deeper Underground“ that night or not, my personal favourite. The bass line of the song is highly memorable and recognizable to many due to being in the soundtrack of ”Godzilla“ back in 1998. I would have loved to hear Paul playing that line using our products, but the evening had different plans…

At around 8 pm Paul’s technician took some photos. In the meantime we were searching for a road case with the Jamiroquai logo on it to have it as background for the photo session. I realized how big those ”behind the stage“-areas are; endless corridors, tunnels, trucks, buses, busy people and workers everywhere. It’s a city of equipment; constructed for a 2-hour show. The concert hall was the Munich Olympia Hall with a capacity of around 15.000.
Later Paul said goodbye to us as he needed to prepare a few things for the show. We arranged to meet later at the after show party.

So we exited the backstage area, had a few snacks & drinks and then took our seats. We were seated in the second row with a perfect view of the stage.
The support group, a DJ duo, were still playing and trying to warm up the hall which filled up slowly.
The DJs performed a last filter sweep, techs went on stage and did a final line check for the main act. People were already shouting and imitating the vocal checks ”Hey, Hey, One, Two, Hey.“

And then the lights went off, and on three big LED walls, an animated intro for Jamiroquai’s show started. The crowd went wild, while the band was entering one by one onto the stage and greeting the audience.  The band started playing the first song and it was a great experience, feeling the sound of Paul’s bass filling the hall and knowing our products had a large part to play.

He positioned himself to start singing, and after the first few lines, I knew straight away there was something wrong. The voice we heard through the speakers had no presence, it was hollow and intuitively I was looking at the FOH and monitor engineers to see if they were twisting knobs or searching for a replacement microphone as it sounded like it was damaged.
When the band finished the first chorus I saw JK turn to the monitor guy and pointed to his neck to signal that something was wrong with his voice.
While the song continued he slowly stopped dancing, walked around and gradually stopped singing. He then gestured to the audience with a flat hand on his neck that he seemed to have lost his voice.
The song finished and JK started to talk to the audience with a rasp and nearly no voice:

I am sick. I am so sorry. I have lost my voice. My heart is bleeding! What do you want me to do?

This moment was bizarre.
The poor band stood and waited, while JK talked to the audience, again and again apologising and asking the audience what to do.
I had a feeling that the evening was going to be a strange one, but didn’t know it would be so short.
JK told the audience that they would try another song, while some people in the audience shouted that the band should play instrumentally or that the three backing singers should take over.
Jamiroquai’s front man wanted a second try, the band started playing, but not for long: JK  left the stage while the band was playing and (if I remember correctly) came back after the song was over. He told the audience that they would stop there, he apologised repeatedly and a backing singer escorted him off the stage. I felt so sorry for him, knowing that a voice isn’t a pedal or a part of a signal chain you can simply replace. In my musical career, I too had experienced standing on stage and feeling I was increasingly losing my voice. And although I have never played in front of 15.000 people, that moment your throat tells you that the game is up, is not something I wish on anybody.

A few seconds later the event organiser hit the stage and told the audience that the show had to be cancelled immediately, he was very sorry and that the tickets would remain valid. This was good news, although some people in the audience inexplicably started yelling.  As mentioned above, a voice isn’t something you can easily replace and sickness simply has to be accepted. No doubt there were people coming from far away, fans would have taken flights to attend the show in Munich, but there are some things in life you can’t control.

The hall emptied very quickly, but my friend and I stayed a little bit longer to digest what had just happened. I was thinking about how much this would cost the production company but also thought about the crew. They would perhaps get more sleep that night, as the show finished around 2 hours earlier…

As we were driving home, my friend and I agreed (ironically) that we would never attend a concert together again, On the last show we went to a few years ago, the band had to restart a song a second time in front of 80.000 people because they were completely lost. I think the band was called ”Depeche Mode”. But this is another story I will tell you over a beer sometime.

This goes to show that some things are simply beyond our control: we can only do our best to keep our gear working, double check everything and purchase only the best and most reliable products. At LEHLE and RMI we want to give you the feeling you can rely on our products because we strive for perfection when developing our pedals. Using high-quality components with no compromises, we have even developed our own switches that have a considerably longer lifespan than most other pedals.

But if a voice stops working, even we are helpless.
And that’s life. 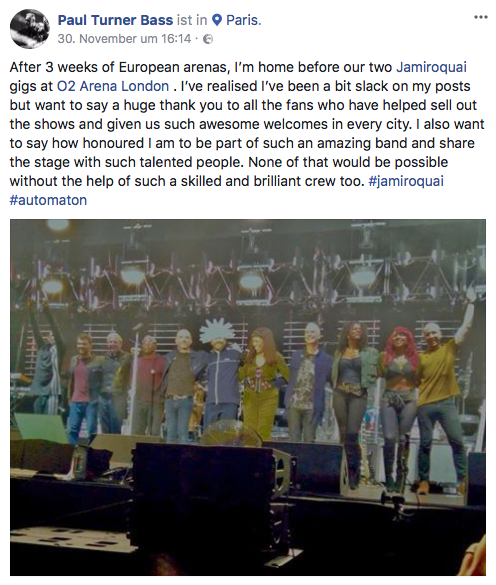