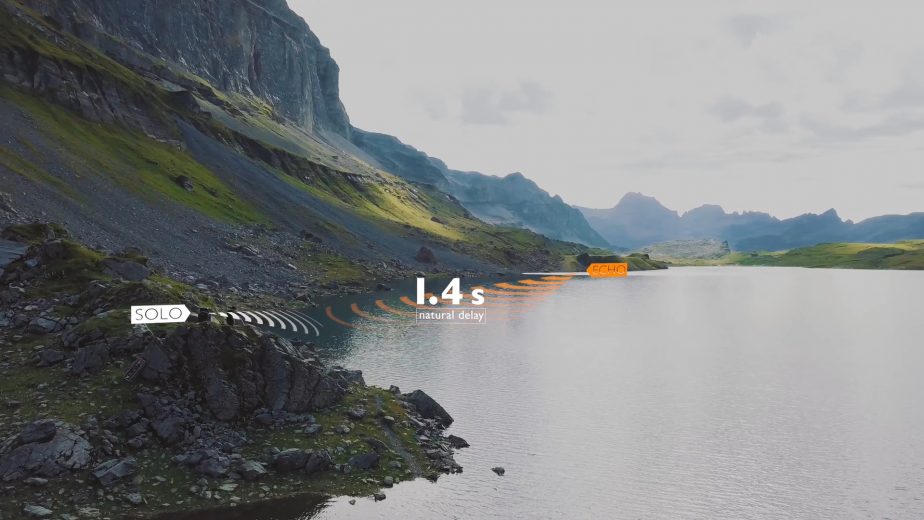 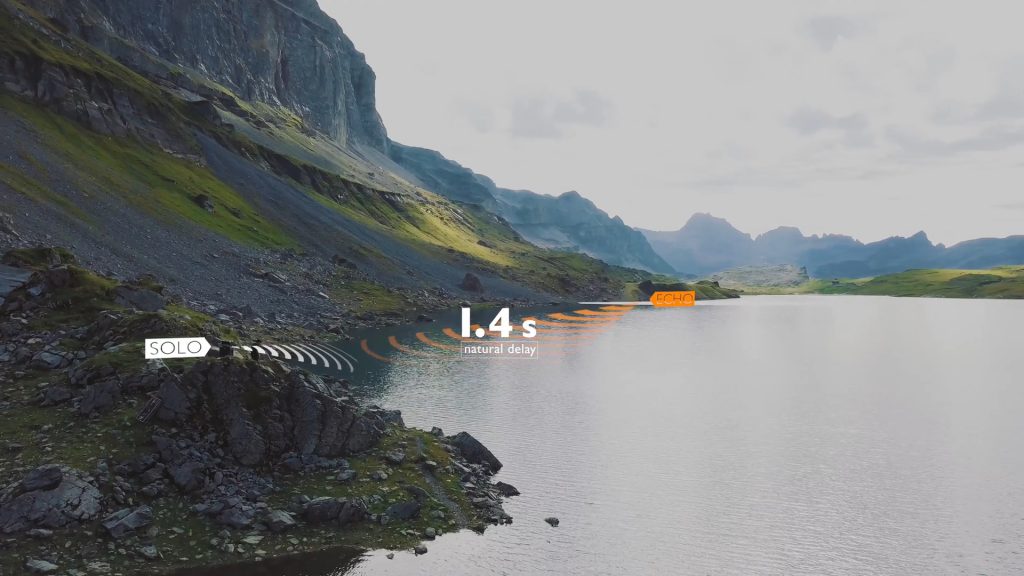 A while ago we got an email from our friend Jürg at Vovox and he asked us if we could provide a splitter and boost for an experiment: testing probably the longest guitar cable in the world! Since Vovox is from Switzerland they planned to do it in the Swiss Alps at an altitude of 1800 m (approx. 6000 ft).
The answer was, “Yes, we are in.” 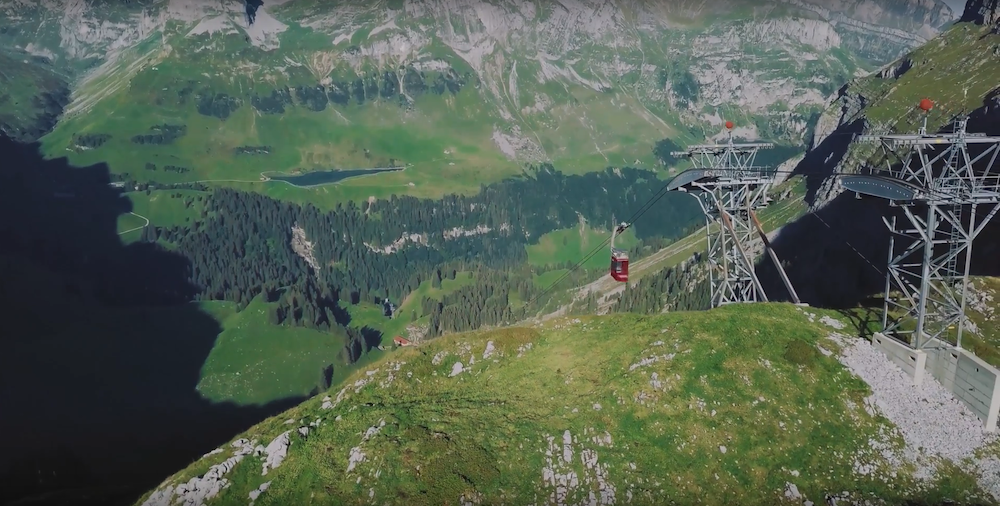 A few months later Burkhard and I went to Switzerland, parked the car, grabbed our stuff (P-SPLIT II and SUNDAY DRIVER) and backpacks with survival items, and walked to the cable car. A few minutes later and about 800 m higher we were in a big valley nearly on top of the mountains. 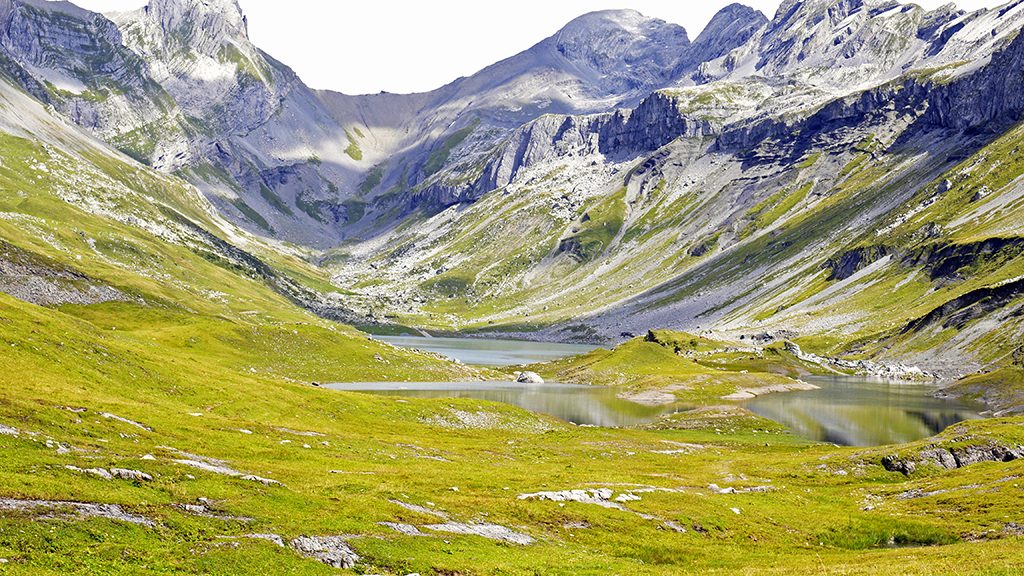 Jürg met us there and we hiked to an Alpine cabin. The weather was great, the sun was shining and it was about 30°C (86°F).  We were sweating, but there was a soft breeze. If you are at this altitude the air is much thinner so you feel you have to breathe twice and every step is exhausting.
There were about 18 of us; some of the Vovox team, Matthias of Blackhole Amplification, Alain from Power-Blox (big rechargeable batteries), Christian with the cameras and drone, and well-known avant-garde musician Christy Doran with a few others helping and supporting. 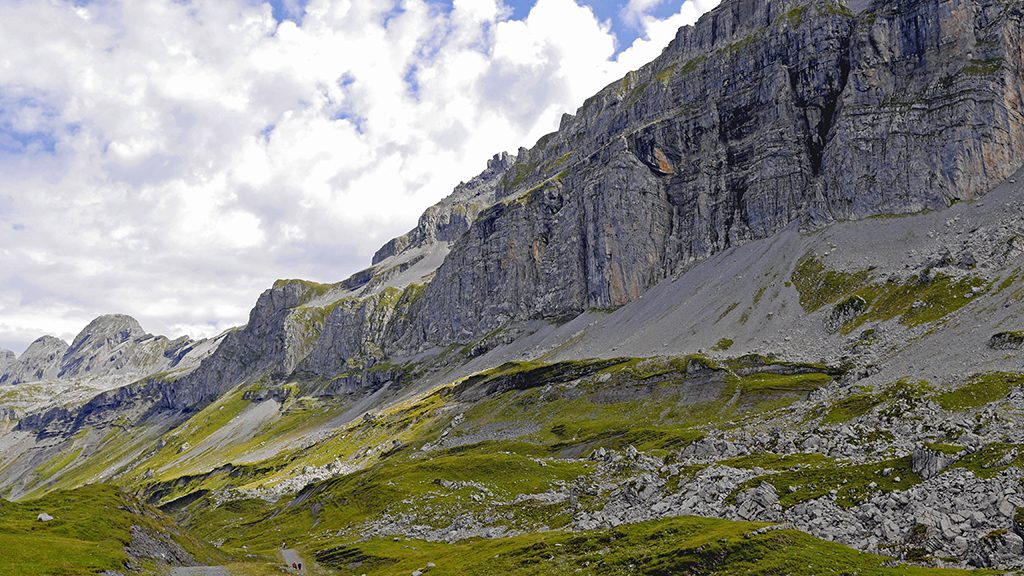 We had a quick lunch, assigned the tasks and got started.
The plan was to transport the materials using a tractor and trailer close to a lake and then carry everything by hand to the required destinations.

Carrying an amplifier or speaker cabinet is never fun (that’s why we build pedals and not amps at Lehle), but if you’re on a small track of 1.5 km, to the right there’s the side of the mountain and on the left it drops downwards to the icy cold lake, it’s definitely not fun. 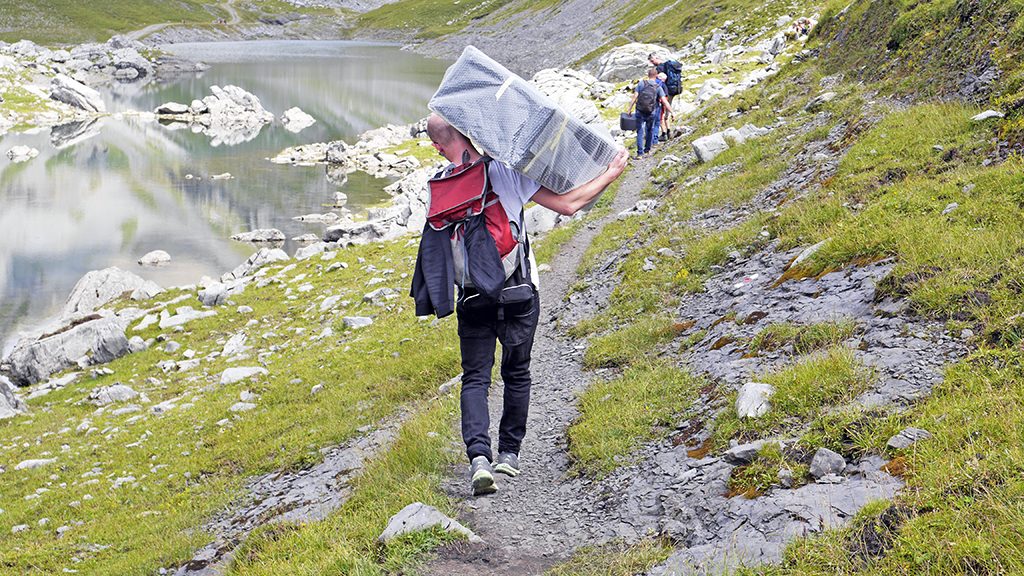 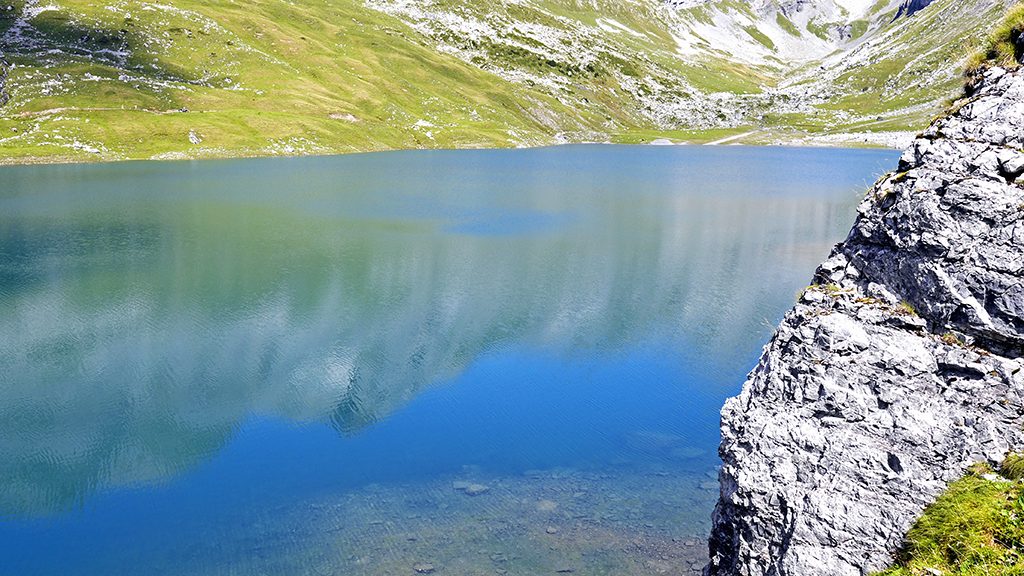 Every step had to be considered carefully and chosen wisely; falling down would have probably caused irreversible damage! We were not alone up there: tourists on a day trip, while cows, goats and sheep enjoying their summer on the alpine pasture. And no: they didn’t use the cable-car, but did hike up. 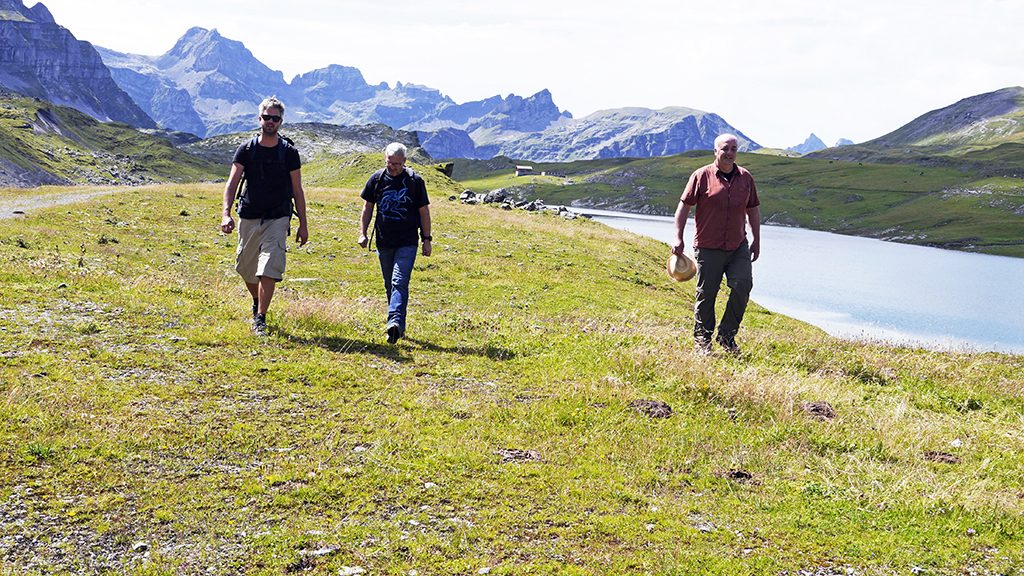 Our two groups arrived at their destinations: about 600 m apart at either side of the lake.
At one end of the lake was guitar player Christy with his pedal board, amp and gear, and on the other side was the so-called ‘delay-amp’. We set everything up, connected cables, power and stayed in touch via walkie-talkie. 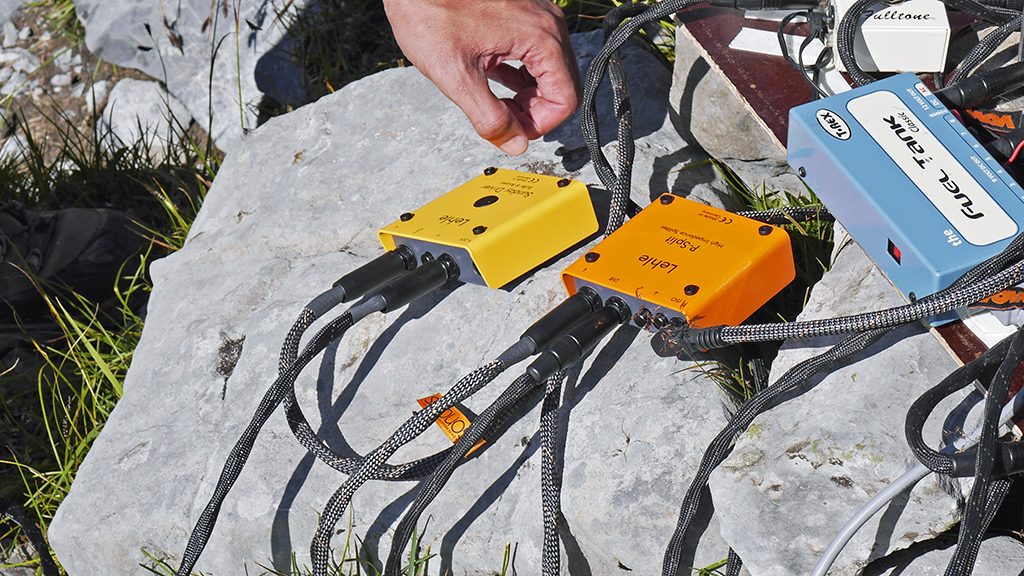 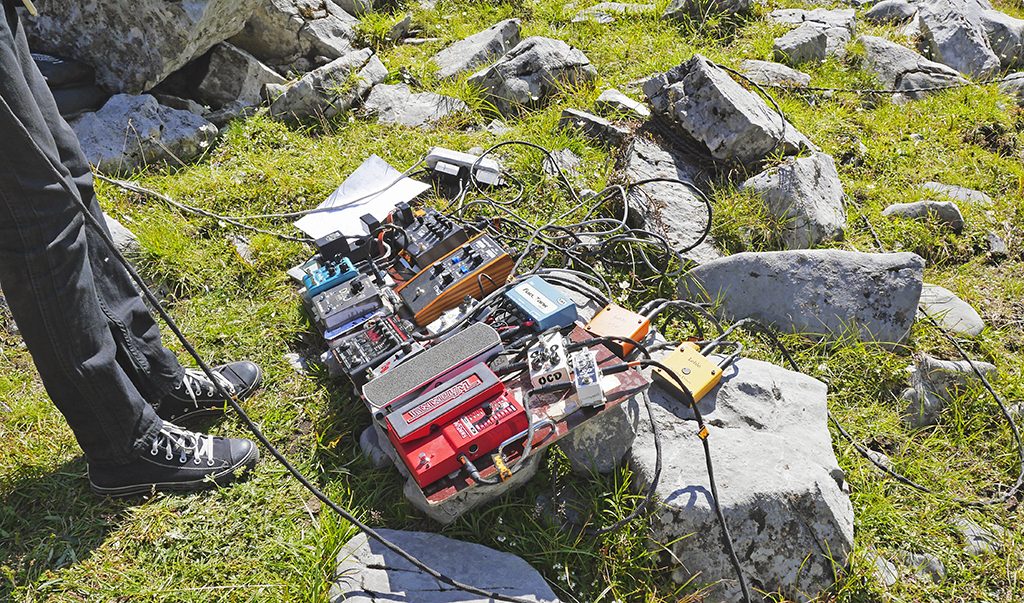 The signal was buffered via the SUNDAY DRIVER and then split with a P-SPLIT II.
Then, with Jürg and 2 of the Vovox team we started to unwind the cable for the split signal. As you can see from the photos it was not that easy: climbing on the rocks near the water, holding the cable reel, keep unwinding and never ever fall! Jürg grinned when I suggested simply using a wireless system next time… 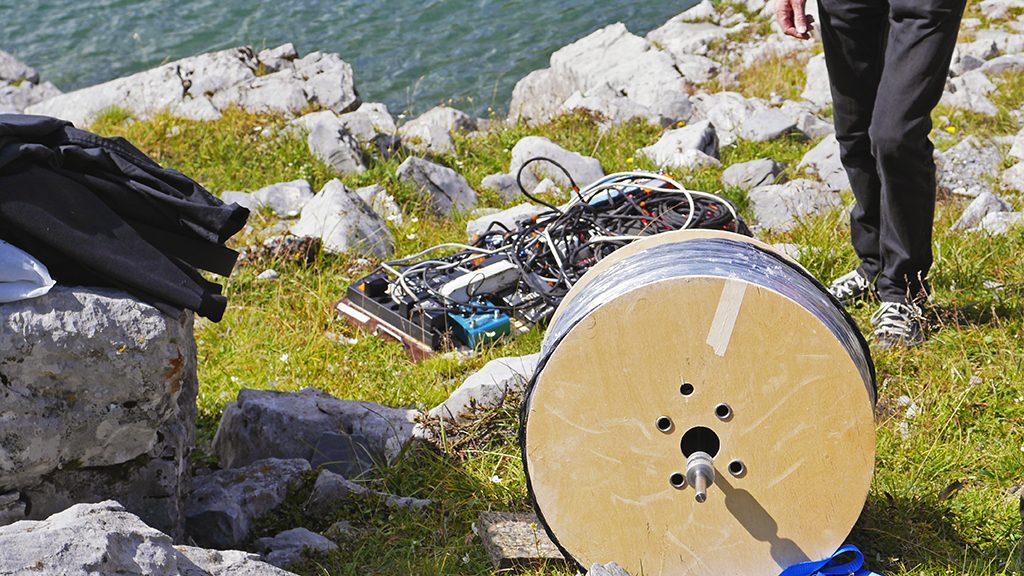 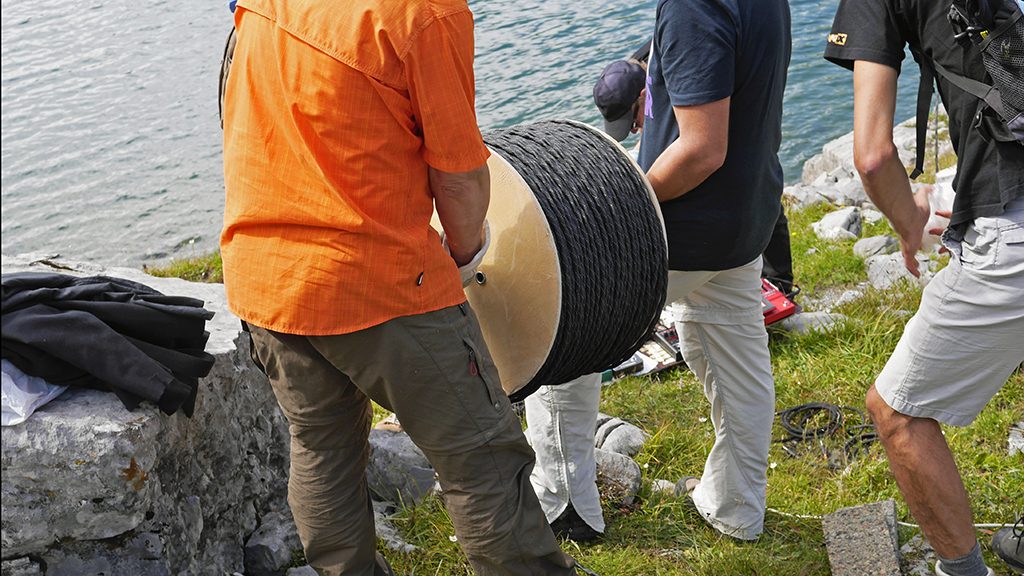 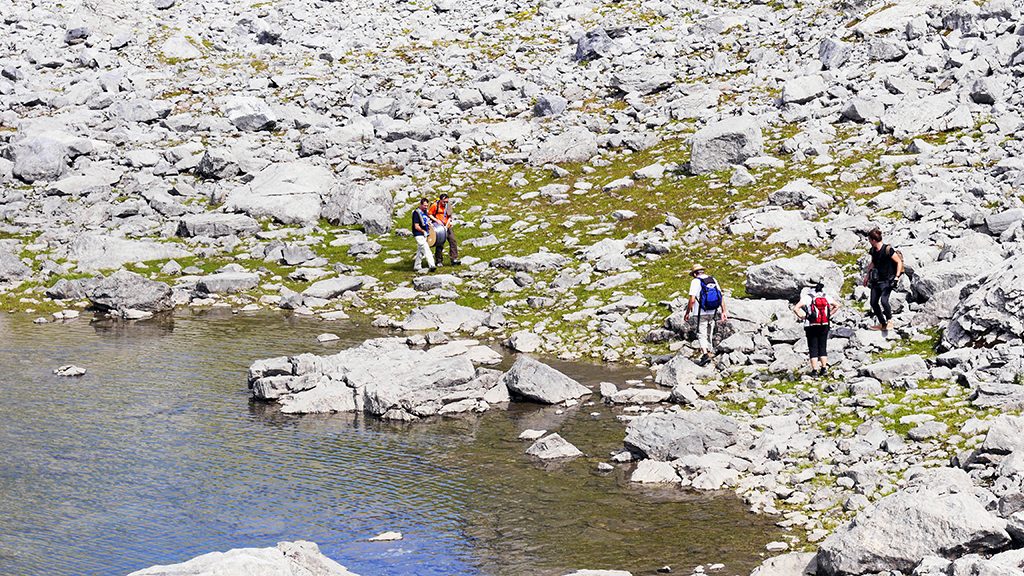 Finally, the reel was unwound, we connected the cable to the ‘delay-amp’ and turned it on. The moment that Christy’s guitar signal was audible, coming from a guitar 600 m away, almost invisible to the naked eye, was deeply rewarding and fascinating at the same time.

All the planning, hard work and climbing paid off! No amp was damaged, the cable was fine, there was no hum (Burkhard was relieved as he had no soldering iron with him) and no-one stumbled, fell or got hurt.

Forget about analogue, bucket or tape delays: an Alp’s delay sounds warmer than any delay I’ve ever heard.

We walked back to the main amp, where the other group waited and Christy was playing. On this trip of 600 m, it was amazing to hear how the acoustics, reflected by the mountains, changed: at the beginning, we heard only the ‘delay amp’, but then gradually we heard more and more of the original signal coming from Christy. The further we left the delay amp behind, the longer the delay got. Of course, it’s simple physics, but who gets the chance to hear an electric guitar signal in the Alps? It was like adjusting the mix control on your delay unit. Forget about analogue, bucket or tape delays: an Alp’s delay sounds warmer than any delay I’ve ever heard. 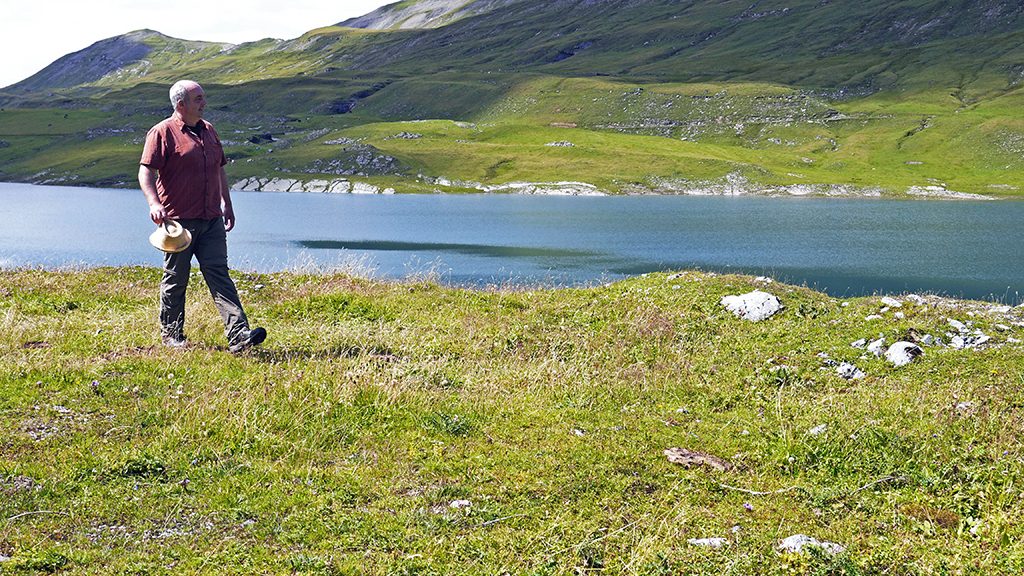 Later we all agreed that we deserved a break. The good people at Vovox had some bread, Swiss cheese and locally brewed beer with them and so we sat at 1800 m in the Alps, tourists hiking around us (‘Are you from the television?’) and the cow’s bells jingled. No-one said, “we need more cowbell!”. There was enough. 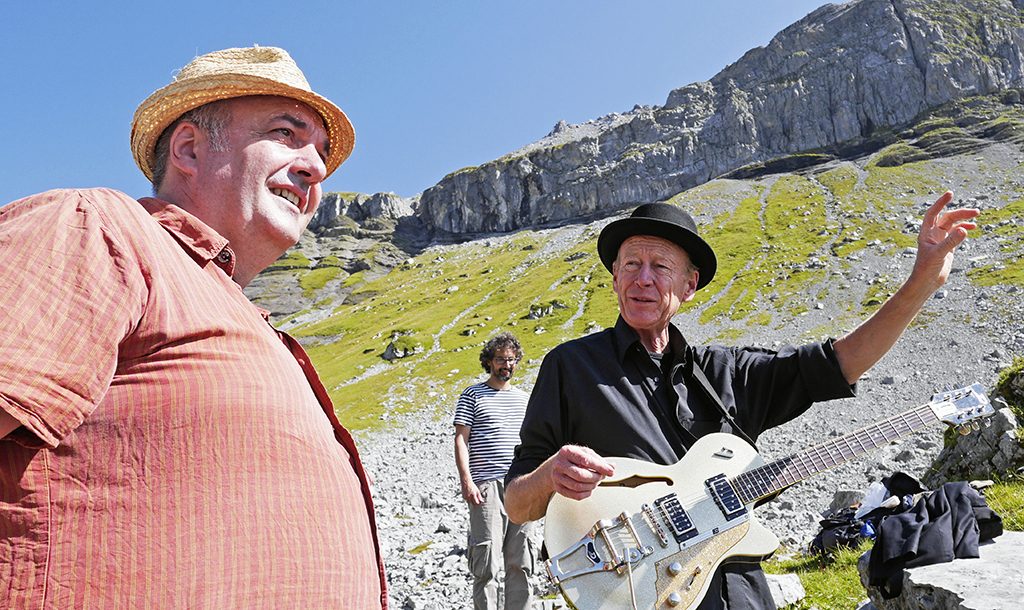 Half an hour later, Christy started his performance and improvised. I told you he’s into avant-garde. He got the best out of his guitar, looped it, took a slide, used a bow, tapped his delay, moved the whammy, played weird scales up and down, … and everything accompanied by a natural delay of 1.5 seconds from the remote amp and then multiplied by the mountain range around the lake. The only thing he ironically complained about afterwards was, that the fixed natural-delay was not tappable…

Christian did the videography and controlled the drone, covering a lot of different angles.
You and I have probably seen and heard a lot of weird and wonderful things, but let me tell you: this was one of the most impressive things I have experienced in my career in the music industry. 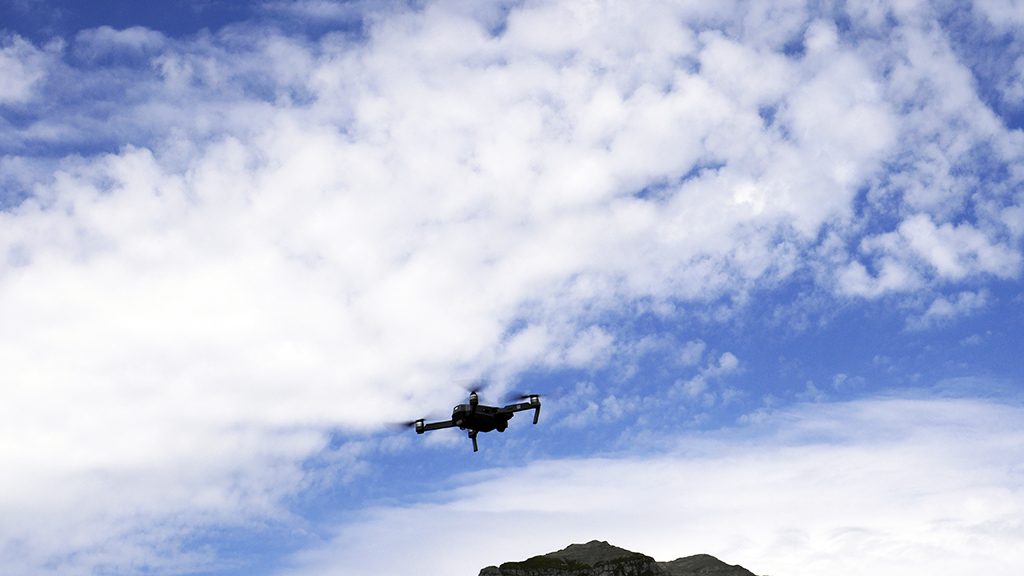 Mountains do have a magical impact and hiking at this altitude is something very special and relaxing, perfect for recharging or taking your mind off things, but connecting our love of music and the rewarding jobs we have to this wonderful piece of nature was an adventure, I wish everybody could experience this once in their lifetime! 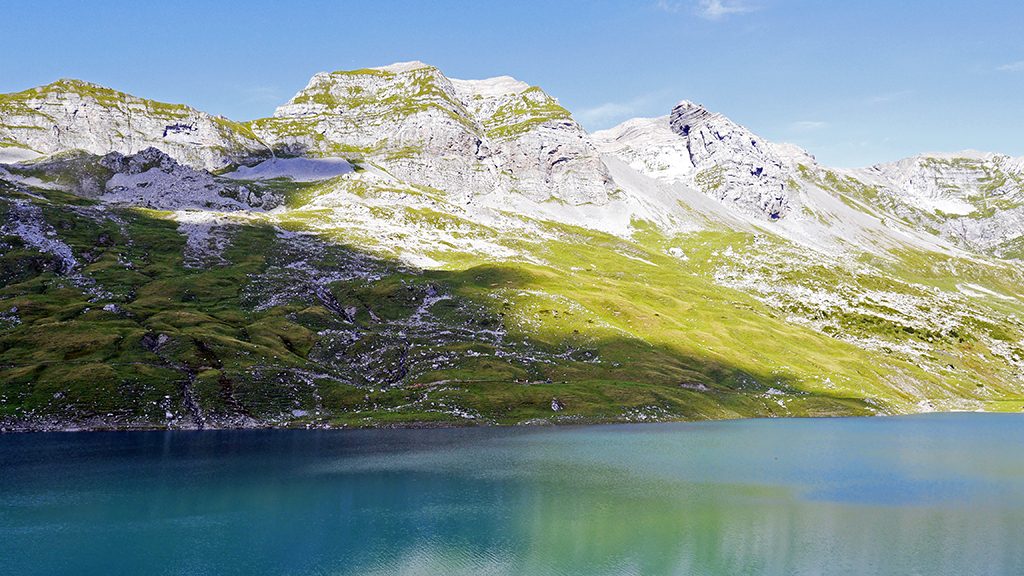 But an adventure cannot be an adventure until the job is done!
After the performance, everything had to be packed up. Yes – rolling up 600 m cables and carrying amps and speaker cabinets back to the cabin so the tractor could pick us up; or at least the goods.
We thought about leaving the cable as a permanent installation but eventually decided against it because cows don’t have amplifiers. Or at least we haven’t seen them.
On the way back Burkhard tried a new Sherpa-technique and strapped a 2×12“ cabinet on his back, while I tried every possible approach to carrying a valve-amplifier, hoping to find the most comfortable option: shoulders, back, front, diagonally, by the handle. It made no difference at all: after a whole day, kilometres of trails and thin air it was simply exhausting (at least for a digital native like me). 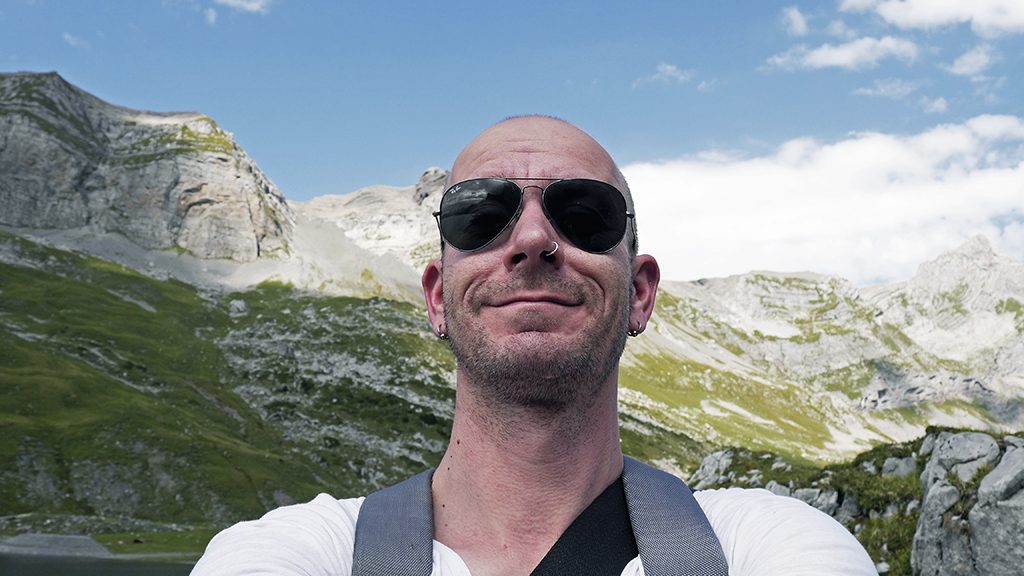 Finally, back at the lodge, we were served an excellent dinner and later on when it got dark and cold, we sat outside with a few drinks, wrapped in sweaters and jackets and digested the unforgettable impressions, while we talked and looked into the starry sky.
After a short night in the alpine cabin, we had a hearty breakfast and a few of us took the opportunity to go hiking again.
Later we went back by cable car and landed safely in the valley below. 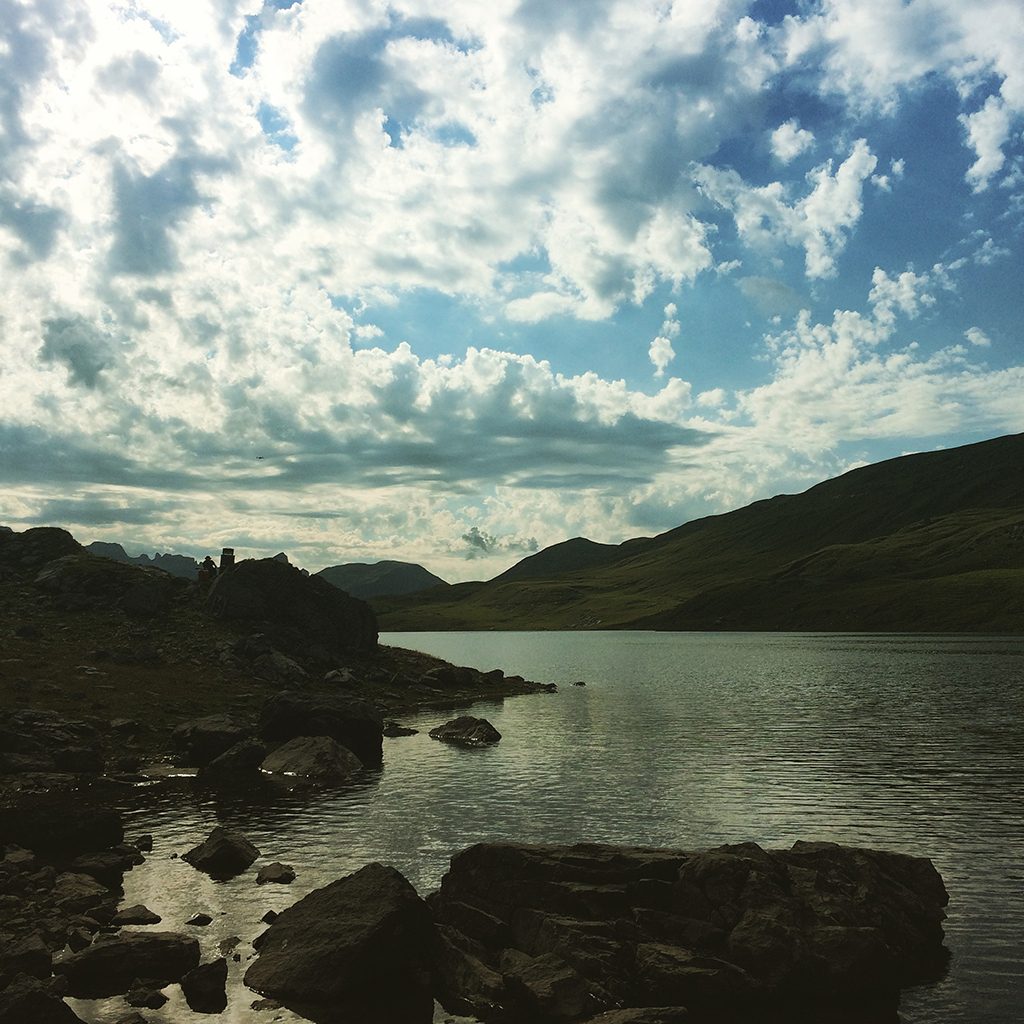 It is beyond description how outstanding this experience was. Of course, it was never about comparing technical or electronic specifications or achieving an official world record, but more to challenge ourselves and as mentioned above: bringing together passion, music and our jobs in one of the most impressive and beautiful places in the world: the Swiss Alps.

Thanks to Jürg and Vovox for the invitation and the unforgettable adventure!

One thought on “The world’s longest guitar cable?”